I’ve been for a while now re-watching the various seasons of Extra Credits while on long commutes, one of the episodes I was re-watching got me thinking much deeper about the topic. The episode I was revisiting was The Waiting Game – Why Weird Games Become Cult Hits, and while I was watching it for the second time I had an interesting thought, as Dan explains these traditional unfolding or waiting games depends entirely on player curiosity for the main engagement hook of the game, starting the player with almost nothing and asking them to continue playing with no clear goal in mind. Eventually, giving a little bit of content in the form of something new to do or somewhere new to explore, but JUST enough to keep the player playing, walking a razor thin line between enjoyment and boredom. But what if, the ENTIRE game is just one big payoff, that happens at the very end of the game, and once that payoff is finally released the game is over.

Introducing TAMAGO by Baibai. A game that fascinated me since i saw it browsing Youtube. 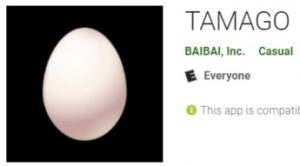 This game, in my opinion is actually a work of art. Poetic almost in it’s execution, the game has the theoretical MAX in terms of work spent developing for playtime. With what I estimate to be around 30 minutes of development time for probably 6 months to a year of playtime (if you play conservatively).

But besides the creation of the game and getting into the content, for those of you who are fortunate enough to not be apart of the 5 MILLION INSTALLS since May 23, 2018.

The game starts of (and ends with…) a single egg and a counter of 1 million. 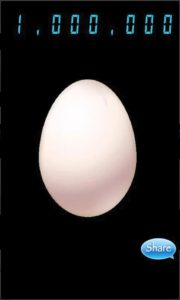 Every time you click the egg the counter goes down. And when you reach 0 (presumably, I haven’t downloaded or tried it myself) something incredible happens. But that’s it, that’s the whole game.

In my mind, this is a work of art, poetry in it’s purest form, it distills the concept of work to reward to it’s core. You click one million times and you get to see what happens.

So what does this teach us? I believe that with the amount of downloads, ratings, and comments on TAMAGO that curiosity, is on equal if not greater than any other engagement hooks (mechanics, graphics, story, narrative). Human curiosity to find out what happens no matter what is so incredibly powerful that clicking a screen 1 MILLION TIMES is a game that has over 5 million downloads on Google Playstore.

I think that with this success story it would be possible to expand this to an even greater extent, making a game that the reward hits all at once at the very end of the game, giving the ultimate payoff, instead of sectioning small payoffs for content throughout the game.

Whether it’s good or not or even possible, I just thought it would be interesting to have a game like that, where the payoff is all at once in one big lump sum for the entirety of the game.

Until next time, keep thinkin’ critically about your games (*´∀｀)b!

2 thoughts on “Content Reveal – Why not try ALL at once?”